Clyde's adventures in the snow, continued

This morning on the Metro...I was sort of immersed in my crossword and John Legend. And then I looked up as the train stopped at a station and realized that what had been a pretty empty non-rush hour train had filled up. I pulled my purse onto my lap to give the guy who had just gotten on the seat next to me. And he smiled. So gratefully. As if I had done something out of the ordinary or made some major concession. It kind of made my day. And it was one of those once-in-a-while Metro experiences that makes you wonder. Who was that guy? Where was he on his way to? And did he have any idea how nice his smile was?
Posted by samantha.p.friedman at 4:57 PM No comments:

The words, the ink, the newsprint

This Sunday, my amazing journalism school classmate who now works at the world's best newspaper -- seriously, he works there, as in, his paycheck comes from the New York Times Co. -- took me on a tour of the NYT building. I think the event stroked his ego a bit; I was in reporter's ecstasy the entire time, and he didn't miss it. 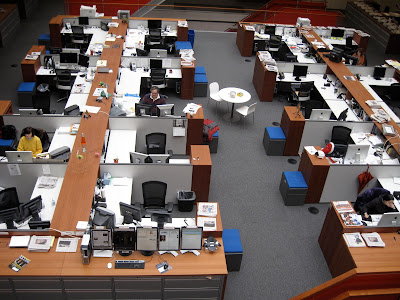 My friend, the NYT staffer, refers to the above as "pods," not cubes. These Times guys really have to be cutting edge, don't they? Surprisingly, however, there's no huge masthead in NYT font hanging anywhere above such pods. On the other hand, more than one friend who visited the Arkansas Democrat-Gazette noted it felt like the type of newsroom you see in a movie. (Throw me a bone here -- there has to be something that makes the Dem-Gaz superior to the NYT.)
You don't need to be too high up in the hierarchy to get a nameplate at your desk, which I found awesome. I've never had a nameplate anywhere I've worked. And I want one.
Posted by samantha.p.friedman at 9:44 PM 1 comment:

And this year in Arkansas, birds fall from the sky!

From the New York Times:
For Arkansas Blackbirds, the New Year Never Came
The New York Times, January 3, 2011
Times Square had the ball drop, and Brasstown, N.C., had its descending possum. But no place had a New Year’s Eve as unusual, or freakishly disturbing, as Beebe, Ark.
Around 11 that night, thousands of red-winged blackbirds began falling out of the sky over this small city about 35 miles northeast of Little Rock. They landed on roofs, roads, front lawns and backyards, turning the ground nearly black and terrifying anyone who happened to be outside.

The rest of the story
Posted by samantha.p.friedman at 10:36 AM 1 comment: