Passover picnic at the drum circle

Two great things. You can't really go wrong. Thanks to Moishe House DC for hooking it up.

In honor of Passover and the glorious (and final) arrival of spring in DC, the good people at Moishe House who arrange Jewish and other themed activities for young professionals in the area hosted a Passover picnic at Meridian Hill Park today. I don't think anyone ate the gefilte fish (isn't once or twice a year at seder enough?) but the Israeli salad and the chocolate dipped matzah were pretty delicious. 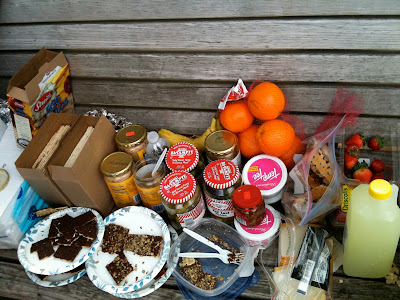 The sun was shining, people were playing frisbee and football, and pups were everywhere (I should have brought Clyde).

And then, the best thing of all, a ragtag crowd of drummers was gathered to put on what I hear is a regular Sunday afternoon jam session.


I really want to call them drummists, not drummers, because while I'm not sure that's a real word, they were serious artists. It was amazing to watch. They created a rhythm that they'd go with for a while, and then someone would switch to something new, and others would follow or go off in a different, but always complementary direction. The way they could so easily and quickly sync with one another was so impressive to my pretty non musically inclined mind. And the drums themselves were interesting to look at. If I had to guess, I'd say there were drums that had been crafted in several faraway countries. 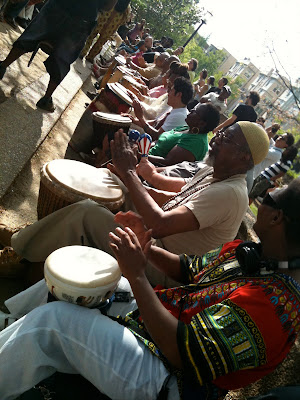 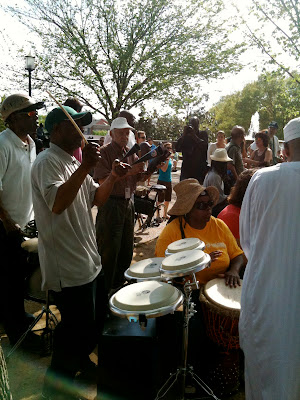