The Reduced Shakespeare Company may have made its name delivering a quick and dirty summary of the bard's greatest works, but these days, the comedic trio is shrinking movies into one-liners, too. Until July 3, the Kennedy Center's smaller and more intimate Terrace Theater plays host to Reduced Shakespeare Company in Completely Hollywood (Abridged).

The show was honestly one of the most hilarious things I have ever seen -- and I am not a big stand-up comedy fan. The lines are mostly scripted of course, but it's also a little bit of improv, a touch of miming, plenty of cross-dressing, some awkward audience participation, a lot of very funny costumes and props, and ongoing hysterical banter among the three sole cast members, Dominic Conti, Reed Martin and Austin Tichenor.

The show is advertised as referencing 187 movies in 100 minutes. So many of the lines, actors' names, scores, theme songs, and even poses and body language were so incredibly well-known, they were quickly recognizable to all. Of course, I didn't catch all the allusions, but that's what makes the show fun for various ages; there was laughter among the older crowd when my brothers and I were sitting there clueless, but when some lines snuck in from Gaga, we had our chance to chuckle knowingly.

As described in the playbill, "WARNING: This show is a high-speed, roller-coaster type condensation of Hollywood (the movies and the mindset) and is not recommended for people with heart ailments, back problems, film degrees, inner ear disorders and/or people inclined to motion sickness. The Reduced Shakespeare Company cannot be held responsible for expectant mothers."

"Completely Hollywood (Abridged)" through July 3 at the Terrace Theater
Posted by samantha.p.friedman at 11:15 PM No comments:

Very prominent coverage in today's Washington Post of Faith Shared at the National Cathedral, a joint program planned nationwide by the Interfaith Alliance and Human Rights First to promote interfaith harmony and counter Islamophobia. The story begins above the fold on the front page of Metro, covers almost the entire page as well as continues later in the section.

Full text below, but have to see the story online (or in print!) to check out the beautiful photos of leaders of different faiths leading a service together in the famed National Cathedral.

As worshipers entered Washington National Cathedral for Sunday morning’s service, some crossed themselves and some took photographs, some wore ties while others wore shorts and a few even wore yarmulkes.

In the center aisle, in place of the baptismal fountain, candle-lit stands bore three books: a Bible, a Torah and a Koran. When a visitor asked a nearby usher what to do, the usher replied: “This is a totally different service than what we usually do. There’s no wrong answer.”

Instead of Communion, the service featured readings from each of the three Abrahamic faiths, part of a project to promote religious tolerance through similar interfaith services at about 70 churches nationwide. The effort aimed to counteract negative stereotypes and hostile rhetoric targeting American Muslims in the past year, notably the controversy about plans for an Islamic center near Ground Zero in New York and the burning of a Koran by the Rev. Terry Jones in March in Florida.

“What we have done together in this great cathedral this morning, along with others in similar services in houses of worship across our nation, can alter the image and substance of our nation, as well as our religion,” said the Rev. Dr. C. Welton Gaddy, president of the Interfaith Alliance, one of the organizations that sponsored the project. “Today’s beautifully written liturgy, informed by Islam, Judaism and Christianity, declares unambiguously . . . we are not scripture burners, rather, scripture readers.”

A local rabbi and imam joined Gaddy and the cathedral’s Episcopal clergy on the dais to share their messages of mutual understanding and respect.

“For nearly a decade now, since the attacks of Sept. 11, 2001, we Americans have known without a doubt that any hope for a peaceful world will require profound engagement among the world’s religions,” cathedral Dean Samuel T. Lloyd III said.

The service began with a traditional call to prayer in the three religions’ terminology — a Hebrew “Bar’chu,” an Arabic “Azan” and a Latin “Spiritus Domini” — all sung in ethereal tones that swirled through the cathedral’s soaring nave.

Then Rabbi Amy M. Schwartzman of Temple Rodef Shalom in Falls Church read a passage from Deuteronomy about showing kindness to strangers. Imam Mohamed Magid, the president of the Islamic Society of North America, chanted a passage from the Koran about the value of diversity.
“God could have made all of us look the same and go to the same temple or same church,” Magid explained. “But God willed that humans are diverse.”

Gaddy said he hoped the readings would underscore the commonalities among the three traditions, especially their shared message of tolerance and compassion.

“No one verse or one passage in any book of scripture should be allowed to hijack or hold hostage the central truth, the overarching as well as pervasive moral mandate, which emerges from the full sweep of truth in those books of scripture,” he said. “Cherry picking isolated texts . . . allows mean-spirited people to turn the scripture of our religions into weapons.”

Almost 1,000 people attended the service, an average turnout for a summer Sunday. Among them were people actively involved in interfaith dialogue groups, as well as those who were surprised to find the Jewish and Muslim elements of the service.

Ken Bagley, who with his family was visiting the District from Connecticut, just happened upon Sunday’s service.

“It was a neat opportunity to hear all three perspectives in one service and to see how alike they are. You too often hear about how different,” Bagley said.

Alex Huddell, a 21-year-old student at American University, said she had never heard the Koran chanted, except “maybe in movies.”

“It was interesting and beautiful to listen, even if you didn’t understand, to the different rhythms and styles,” Huddell said. “I’m Christian, but I feel a lot of embarrassment about the way Christians sometimes marginalize other religions. So it’s nice to hear there are some leaders in the faith community who are trying to promote the same message of acceptance.”

Pete Carlson, a member of the cathedral’s congregation, said he was inspired by the service and hopes to attend more interfaith events.

“It was even more moving than the normal service here on Sunday,” Carlson said. “It felt like we were a part of something much bigger and much older.”

Posted by samantha.p.friedman at 6:18 AM No comments:

A few photos below of the Cathedral Church of Saint John the Divine in New York, where Faith Shared New York City was held today: 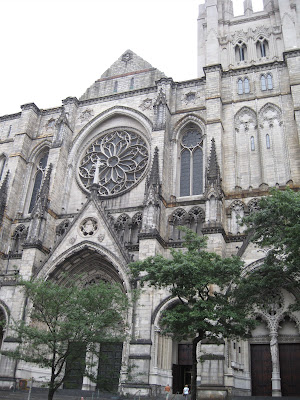 The serviced was led by the Rev. John H. Vaughn, Executive Vice President of the Auburn Theological Seminary. He was joined by the Rev. Canon Thomas P. Miller, Canon for Liturgy and the Arts at the Cathedral, and Imam Adamu A.M. Suleimana, originally from Ghana and now a practicing imam in New York and Georgia. All shared thoughts on the importance of interfaith cooperation and harmony. The service also included Jewish, Muslim and Christian readers from Face2Face.