Another perspective of the St. Louis Arch

After posting Julia Cooke's piece on the Arch yesterday, her friend Tyler Francis shared a pretty cool Arch pic of his own. 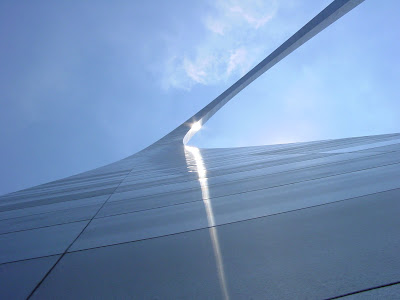 Recently reconvened with writer New York-based and longtime friend Julia Cooke in St. Louis for a Hoya roommate's wedding. Hurricane Irene left her stranded in the Midwest for an extra day, which gave her the chance to visit the gateway to the West. She was kind enough to share her experience visiting the St. Louis Arch via a guest post.

Check out more of her work at www.julia-cooke.com.
﻿

Among the very expensive items that I absurdly covet -- absurd because I understand full well that unless I win a lottery, I will not own them -- are a bright blue Bottega Veneta purse and a marble-topped Eero Saarinen Tulip table. The mid-century modern designer's table feels modern and contemporary to me, simple lines and an elegant but unpretentious feel, much along the lines of his iconic Gateway Arch (or, officially, the Jefferson National Expansion Memorial) in Saint Louis, Missouri. I may never host a large family dinner around a marble-topped Tulip table in my dining room, which right now is too small for one, anyway, but Saarinen has made masterpieces that are more accessible. This 1968 sculpture -- at 630 feet the tallest national monument we have --  is one of them.

When I was in Saint Louis last weekend for a friend's wedding, to the arch I went. It's stunning from the outside: a twisting, angular triangle that's wide and sturdy at the bottom and soars up high into a slim, precarious curve at the top, the world's largest architectural structure that's designed as a self-supported arch. From far away, only the looping top of it can be seen over the city skyline, swooping over the horizon. As I walked up to its base through the park greenery that surrounds it, I saw that it's actually much broader where it meets the concrete than it seemed, large enough for, say, an elephant to hide behind. I couldn't quite see the whole thing as I looked up to follow its line of glinting stainless steel against the blue sky and shaded my eyes against the sun. I wondered what it would look like in cloudy weather; less striking, of course, but then maybe it would disappear into a slate-grey sky, the Mystique of national monuments.

I paid the $10 entry fee to be shuttled up to the top of the arch in the tiny, sixties-futuristic-pod-like elevators that fit five stooping, seated people. I was already there, so I couldn't just stand around at the base, I reasoned. I meandered through the kitschy historical museum-y area, distracted, wondering what it'd be like up at the top; waited in line to enter my teensy little elevator, into which I jammed with three other people, knees knocking together as we all shared a glance that expressed our gratefulness that our fifth seat was emtpy. We faced each other, awkward in our little circle, shoulders stooped in the white-painted, flurorescent-lit, egg-like elevator, and off it jerked. One window in the door of the pod showed the entrails of the structure, all beams and wires and steel stairs, and the egg rocked back and forth as it made its way up the curve of the arch to the top. At this point, I was no longer stunned by the smooth lines of Saarinen's design. I was wondering what had posessed me to think that heading to the 620th foot of the spidery legs of this thing -- supported by only its own weight! -- was a good idea.

By the time I reached the top, my hands were sweaty and I was in no mood to stay. But my companion was entranced, and couldn't believe that I -- a girl whose reading doesn't pause when my plane hits turbulence, who didn't break a sweat when my flotation device on one scuba trip sprang a leak -- was practically whimpering at the top of the St. Louis arch. Eero Saarinen, for God's sake. A far more intelligent man than me, and he deemed it okay, and there were park rangers up there, too. There were sticky-fingered children leaning into the six-inch high windows that lined the eight-foot wide space, loud teenagers taking pictures and shouting that WOAH there was the stadium, and there I was, standing in the middle of the passageway, breathing deeply and reminding myself that it would be over soon. Because: it moves. The top of the St. Louis arch trembles, shivers, shudders ever so gently in the wind. The thought that underneath where my feet stood was nothing but ai r-- it terrified me, and I wanted nothing more than to return to terra firma. So I moved slowly, deliberately over toward the elevators. We stood in line, and within a few minutes, a metallic crunch announced the arrival of the elevators, and I slipped in, this time even more squeezed by a fifth tourist with a large camera in his lap, and we jerked and slunk our way back to the bottom, where I got out of the elevator, walked back through the kitchy history area, emerged into the sunlight, and sat down on a bench to face the glinting metallic majesty of the St. Louis arch.
Posted by samantha.p.friedman at 2:02 PM 1 comment: