It's a rare day the DC Metro presents an opportunity for praise. OK that might be a slight exaggeration, but it gets a lot of bad press what with the single-tracking and the supposed medical and other emergencies, and don't even get me started on the escalators.

So it's got to be 100 degrees outside, and WMATA actually ends up pleasantly surprising me today. (Tangent - Sometimes the a/c isn't working on the Metro. Picture it - a train full of tired, rushing commuters sweating in their work clothes and packed to the gills. Sweating. Because there's no a/c. And it's summer. In D.C. And it's humid. Ok I'll stop.)

So back to my happy uplifting story. As the Red line rolls into Medical Center on its way out of the city this afternoon, the conductor comes on the speakerphone. Now, normally, I can't understand a word those guys are saying. I often wonder why they even bother talking.

But this time, the guy said the train would be going out of service at Grosvenor (the first outdoor stop in Maryland), so he suggested that riders who were riding beyond Grosvenor should get out at Medical Center (still underground) to wait for the next train, so they didn't have to suffer the heat wave stifling on an outdoor platform. Very kind of that conductor. Very thoughtful indeed. Today I liked the Metro.
Posted by samantha.p.friedman at 10:02 PM No comments:

Bastille Day. Perfect, an excuse to wax nostalgic about France. Now I transport myself back to a July 2006 excursion to a several-hundred-year old chateau in Brittany in northwest France.

Tangent - I have a pet peeve with languages that change other languages' proper names. If it's called Bretagne in French, then why do we call it Brittany? Some desire to conjure images of a washed-up American pop star instead of an idyllic, Celtic-infused, verdant corner of France? I doubt it. Must be some kind of weak attempt to make foreign names easier to pronounce. We could make some effort to embrace the names originally bestowed upon places by those who named them in the first place. Anyway, back to Treguier.

Treguier is a hamlet near Saint-Brieuc; a bit further east, the walled city Saint-Malo might be somewhat better known. Treguier is a port town on the Treguier River, which goes out to the English Channel. It's pretty isolated; getting there affordably requires flying to Paris and then renting a car to drive the maybe six hours, if I remember correctly. There are trains (of course - because it's Europe, and Europe has an awesome transit system), and Brest even has an airport you can get to from the UK and Spain, but it's best to have a car for exploring the outlying towns.

Treguier's town square's prominent features are a statue of the town's famous son writer and philosopher Ernest Renan and a large and gorgeous cathedral built in the 14th and 15th centuries - typical of such a town, but the age and endurance over so many centuries still amazes me every time. There's probably only a few thousand people that live in Treguier, and it's so small in geographic terms, it's one of those places you can pretty much get to know living there a week and even start to recognize people on the street.

The food is amazing, a mixture of fresh seafood (Dover sole, anyone?) and shellfish (oh so many moules, my favorite) and lots of delicious cheeses I could never name and fresh produce from the weekly market where are all the vendors set up shop, then move onto the next town the next day. We followed the market to its stops nearby in places with names like Quimper and Morlaix. I think I gained four pounds in like 10 days on that trip. A little frivolous we were with the wine and cheese before dinner every night. We got some beach hikes in there too, though, and a ferry from coastal Paimpol took us to the Ile-de-Brehat, where at low tide, the boats sit completely ashore.

I was in Treguier the night of Bastille Day, frankly, the only time in my life that the holiday has been on my radar. As the town erupted in fireworks, every inhabitant gathered "downtown" at the harbor to dance together and celebrate France. I'll never forget the juxtaposition of having flown from the United States, where I had just celebrated the fourth in the American heartland, with the Arkansas Symphony Orchestra playing traditional pops music backlit by fireworks over the Arkansas River, with the French version of their national holiday. Though I had no personal relationship with France and barely spoke the languge, I felt like I was celebrating two countries that year. The people of Treguier loved having visitors in town for La Fete Nationale, and having been there just a few days, we felt kind of at home there and a part of the party.

Remind me why I ever came back?
Posted by samantha.p.friedman at 12:05 PM No comments:

Strings on a rooftop 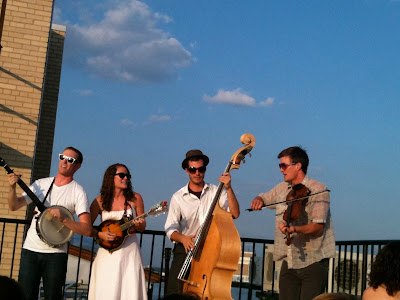 This was the scene on a Dupont Circle rooftop Saturday night -- D.C.'s Second String Band crooning American folk music to an audience of about 30 that I felt pretty damn awesome to be a part of. It was super VIP. A couple friends invited the band to play on their roof as a send-off for their European debut tour. The city looked very different from up there, and it was like if you weren't on that roof that day, you were totally missing out on the fact that this little gathering was going on nine stories above Connecticut Ave.
The band defines "second string" this way: "The squad of players available to replace the starters." They define a "second string band" this way: "The squad of players who play string music from the fringes, giving that music the center stage."
Sounds about right. I think I fell in love with folk music that night. Or maybe it was bluegrass. I don't know enough about it to know the difference. Regardless, it's the type of music that you can be sitting there roasting in the middle of hot and sticky D.C. 90 degree heat, but you're sort of transported to Arkansas or Louisiana for a couple hours, lost in the guitar, the fiddle, the mandolin (maybe?). I keep hearing about Gillian Welch. I might need to go on a downloading spree. I've always been a fan of strings -- I think my favorite instrument is the electric violin -- so of course I loved the Second String Band. The songs have a similar sound, but each is distinct. They write almost all their own music. The covers they played were recognizable but often only slightly so. And it's definitely the type of music you have to see in person because it's kind of a whole experience to be a part of.

That didn't stop me from buying the cd, and as you won't get the chance to hear the band live until they return from Europe, you should probably get a copy too. Check them out at http://2ndstringband.com/.
Posted by samantha.p.friedman at 9:02 PM No comments: 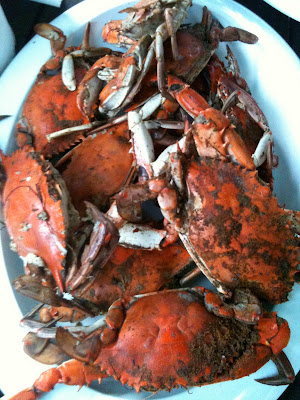 I think David Simon and Edward Burns put it pretty well in The Corner:
"On the Fourth, when every right-thinking Marylander has steamed crabs in celebration"
Posted by samantha.p.friedman at 8:31 PM No comments:

I meant to post this a long time ago, after President Obama spoke on May 29, 2011 at the memorial service following the tornado that hit Joplin, Missouri, in May.

It's Monday, so here's some thoughts to start the week:

"How we respond when the storm strikes is up to us.  How we live in the aftermath of tragedy and heartache, that’s within our control.  And it’s in these moments, through our actions, that we often see the glimpse of what makes life worth living in the first place."
Posted by samantha.p.friedman at 7:39 AM No comments: